Get to Know These Common Birds
courtesy of and taken almost verbatim from the national Audubon Society
By Andrew Del-Colle
January 31, 2018
This list covers many of the other birds you are likely to see on a regular basis, especially during the winter time. It’s composed of the 10 most-reported birds from the 2017 Great Backyard Bird Count and the 13 most-common feeder species, according to the Cornell Lab of Ornithology. The species here can be seen in urban, suburban, and rural spaces, and the majority frequent backyards and feeders. So, whether you’re preparing for your first GBBC or just want to know what that little bird in the bushes is, this primer should help. And in case it doesn’t, you can visit our online field guide or download our free Audubon bird guide app to solve the mystery.
Northern Cardinal 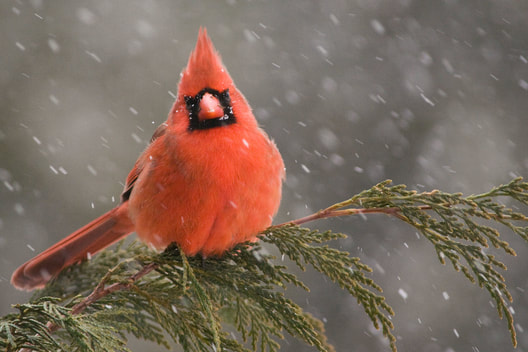 Northern Cardinal. Photo: Michele Black/Audubon Photography Awards
With its black face and crimson crest, beak, and body, the male Northern Cardinal, or “redbird” to many, is one of the most recognized and well-known birds in North America. Though less showy, females are also splendid, wearing soft, tawny feathers instead of the male's bright red plumage. Cardinals are often in pairs and can be seen at feeders and around mixed habitat throughout the East and parts of the Southwest.

Good bird fact: The Northern Cardinal is the most popular state bird (seven) and the mascot for a whole bunch of sports teams. However, despite what the University of Louisville might think, cardinals most definitely do not have teeth.

Learn more the Northern Cardinal's range and listen to its calls.
Blue Jay 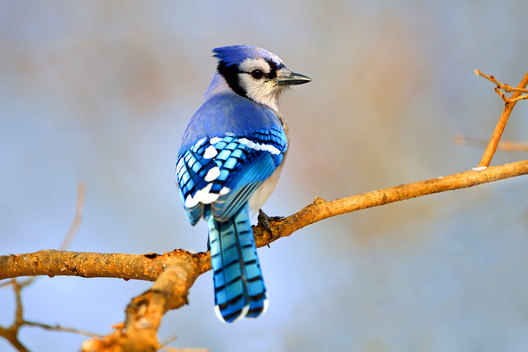 Blue Jay. Photo: Brian Kushner/Audubon Photography Awards
As with the cardinal, it’s pretty darn hard to mistake a Blue Jay for anything else. A distinctive bird that can be seen year-round in the eastern United States, the Blue Jay is of one of the most striking—and loudest—jays. At home in the forest, they also thrive in suburban habitats and are often unfairly (or, okay, fairly) regarded as feeder bullies. While easy to identify at a glance thanks to its crest and bright coloring, don’t miss the stunning pattern of black, white, and blue on the wings.

Good bird fact: The vibrant feathers of a Blue Jay are magnificent, no doubt, but even more impressive are the microscopic keratin particles throughout each feather that scatter light, producing  the cooler colors seen on these and other birds.

Learn more about the Blue Jay's range and listen to its calls.
Mourning Dove 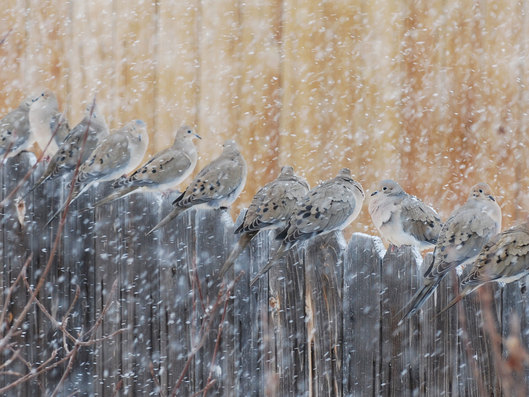 Mourning Doves. Photo: Kat Bradley Bennett/Audubon Photography Awards
The most widespread dove in North America, the Mourning Dove is an easily startled ground feeder that can be found pretty much anywhere with open habitat, from woodlands to cities. Note the uniform brown-gray coloring, dark spots on the wings, light-blue eye ring, and sharp, pointed tail. These doves can also easily be identified by their woeful cooing, which is often mistaken for the hoots of an owl.

Good bird fact: Here’s a new term for ya: pigeon milk. Secreted from the crops of doves and pigeons (part of their digestive system), this chunky, yellow substance is highly nutritious and fed to baby birds after being regurgitated by the parent. Yum!

Learn more about the Mourning Dove's range and listen to its calls.
American Crow 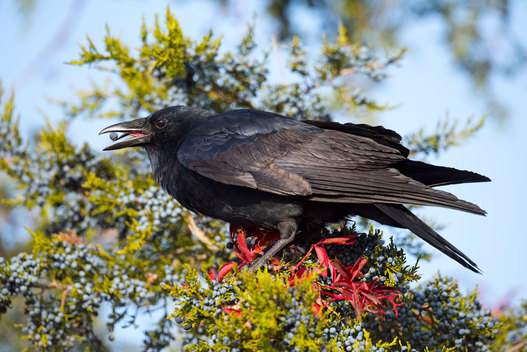 American Crow. Photo: Brian Kushner/Audubon Photography Awards
Sure, you know what a crow looks like. But do you know what type of crow you’re looking at? Often found in a variety of semi-open habitat, American Crows are large, all-black birds that can easily be identified by their harsh caw! call, which knowing is key to differentiating the American Crow from the almost-identical-looking Fish Crow and Northwestern Crow. This guide will help you tell the three apart, and this one will explain the key differences between crows and Common Ravens.

Good bird fact: Aesop knew what he was talking about. Crows and ravens, which belong to the gifted corvid family, are incredibly smart and curious, with the ability to use tools and problem solve.

Learn more about the American Crow's range and listen to its calls.
European Starling 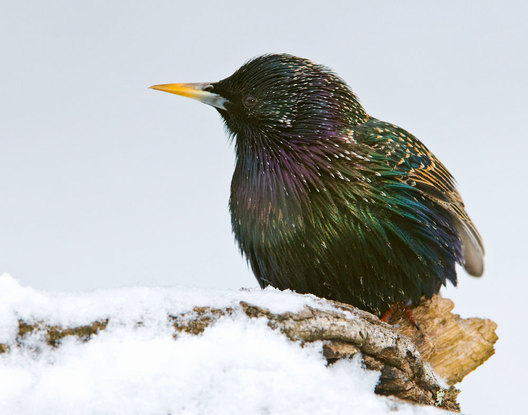 European Starling. Photo: Rolland Swain/Audubon Photography Awards
Talk about a bird that’s truly everywhere. Walk outside, look around, and chances are good you’ll see a starling. An introduced species to the U.S., these birds are now omnipresent—much to the disadvantage of many other species. Often found in huge flocks in the winter and fall, this medium-size forager sports a spiky yellow bill and richly detailed black feathers that have an oily sheen to them. Their call often has a metallic or squeaky sound.

Good bird fact: The European Starling was famously introduced in 1890 by Eugene Schieffelin, who, according to legend, thought that America should have every bird mentioned in Shakespeare’s plays. So he released two waves of the birds in Central Park, and now they've taken over the entire U.S. Thanks, Eugene.

Learn more about the European Starling's range and listen to its calls.
Dark-eyed Junco 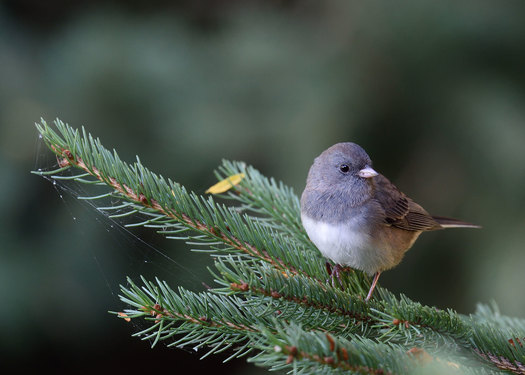 Dark-eyed Junco. Photo: Dennis Derby/Audubon Photography Awards
Juncos are a popular and widespread winter visitor to almost all of the United States from the boreal forests of the North and high mountains. They prefer mixed woods and coniferous habitat, but they are staples of backyards, where they bounce around under feeders foraging and eating spilled seeds. The eastern version of the junco—the dark-eyed one above—features a white belly and a slate head and back, but there are a few different subspecies of the bird that vary geographically.

Good bird fact: Dark-eyed Juncos are colloquially known as “snowbirds” due to their sudden appearance throughout much of the country when the temperature starts dropping. The term is often used for a variety of winter birds, but juncos are the true snowbirds.

Learn more about the Dark-eye Junco's range and listen to its calls.
Black-capped Chickadee 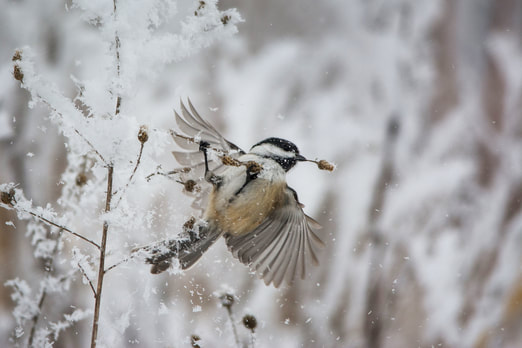 Black-capped Chickadee. Photo: Becky O'Neil/Audubon Photography Awards
A permanent resident across the northern U.S. and in parts of the Appalachian Mountains, Black-capped Chickadees are energetic little birds that prefer mixed, open woods and forest edges. Easy to identify by their white cheeks sandwiched between a black cap and chin, chickadees also live in suburban environments and are popular feeder visitors, where they can readily be identified by quick bursts of their namesake call: chick-a-dee-dee-dee.

Good bird fact: While juncos have several subspecies, there are quite a few different actual species of chickadees across the U.S., and they all look pretty similar. This guide can help you figure out which type of chickadee you’ve got in your area.

Learn more about the Black-capped Chickadee's range and listen to its calls.